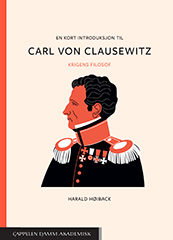 Seen in the light of the enormous consequences of war and armed conflict for a society, surprisingly few attempts have been made to understand and analyze the innermost essence and nature of war. There have been up and down posts about military operations, war journalism, war propaganda, civil-military relations, military strategy and logistics, weapons technology and military planning—not to mention historic wars and battles—but quite a few have set out to reach all the way to and unfold the core of the war understood as an extreme and violent social phenomenon. Put a little at the forefront, relatively little has been invested in the "philosophy of war."

Whether it is because the foremost theorists of war have primarily been prescriptively oriented (activist) in the sense that they have either worked to avoid war or to win wars—and therefore have not been so preoccupied with understanding the innermost essence of war—must be unsaid, but the fact is that relatively few attempts have been made to describe the fundamental mechanisms and universal dynamics of war.

The most significant exception to this deplorable state of affairs is the nearly 200-year-old Vom Kriege by Carl Philip Gottfried von Clausewitz (1780–1831). Although the book and its insights are for the most part based on Clausewitz's own experiences from the Napoleonic Wars, it is still a goldmine of insights and thought-provoking points, concepts and questions. As good books are most, it does not serve pre-cooked answers, but forces the reader to ponder and reflect.

In addition, not only the military strategic practitioner—the officer—but any leader can still read with great benefit the old Prussian's thoughts on, among other things. courage, friction, strategy, fear, rationality, and emotion. Granted: Leadership in modern organizations has very little to do with armed conflict. And luckily for that. But it must nonetheless be my contention that today's board members will often get far more out of spending a few hours in the company of Clausewitz and Vom Kriege than on the latest managerial or organizational theoretical fashion craze.
Now Carl von Clausewitz—and Vom Kriege—have received a new and extremely well-composed introduction. In Norwegian and written by one of the foremost military thinkers in the Nordic countries—Lieutenant Colonel and Professor Harald Høiback.

Over 219 pages, Høiback gives the reader a finely dosed and well-balanced introduction to Clausewitz's thinking, and how Vom Kriege came into being under the influence of contemporary philosophical currents, Clausewitz's own experiences from the Napoleonic Wars and his most important professional sparring partner, his wife Marie von Clausewitz (1789–1836). The central question Høiback asks himself is why Vom Kriege has been given such a long life. Why is Vom Kriege one of those books that never ends up saying what it has to say?

Along the way, the Norwegian Clausewitz connoisseur comes up with several different bids: Clausewitz lived in a completely unusual time marked by a new form of war (the Napoleonic Wars), he was for large periods of his life surrounded by intellectual fighters such as Gerhard von Scharnhorst (1755- 1813) and Marie von Clausewitz, and then he was simply able to reflect and analyze deeper and more insightfully than most. In addition, Clausewitz wrote his work at a time marked by fruitful tensions between, on the one hand, Newtonian rationalism, the Enlightenment, and the worship of reason, and, on the other, a budding German idealism and a heightened focus on the irrational aspects of life. While Clausewitz's contemporary Swiss-French counterpart, Antoine Henri Jomini (1779–1869), was fully acquainted with the ideals of the Enlightenment and the efforts to put the war on mathematical formula, one finds in Vom Kriege ways of thinking and concepts that reflect both the Enlightenment ideals and a keen eye for the fact that war is to a large extent also—and necessarily must be—a form of human interaction influenced by politics and emotions. Clausewitz does not refrain from—entirely in the spirit of Jomini— presenting reason-based instructions and practical rules, but he also uses a lot of space to describe how, for example, hatred, fear, insecurity, coincidence and courage are among the permanent inhabitants of the war.

A special strength of Harald Høiback's very well-written introduction to Clausewitz and Vom Kriege is to be found in the presentation of the old Prussian as a philosopher. Høiback does a lot with conviction by demonstrating how Vom Kriege puts man at the center and by documenting that the book is not (alone) an attempt to describe what war should be, but to a large extent to explain what war really is. is: Politically motivated violence influenced by emotions and coincidences. But it is first and foremost a human and social phenomenon. Clausewitz introduces some core concepts and uses them as a prism or raw material in his analyzes of the eternal nature of war and its changing manifestations. The core concepts are, as pointed out by Høiback, still very useful and rewarding. A brief introduction to Carl von Clausewitz is aimed at anyone with an interest in strategy, military history and theory. But as suggested, readers with a general interest in management and organizational theory will also be able to get a lot out of the book. It is written with a wide readership in mind, and the language is liberatingly cleansed of military jargon and technical terms (it is more "Professor Høiback" than "Lieutenant Colonel Høiback" who has carried the pen). But be warned: the book seems like an excellent "clickbait" to Vom Kriege. The latter fortunately also submits in translations of e.g. English, Danish and Norwegian."